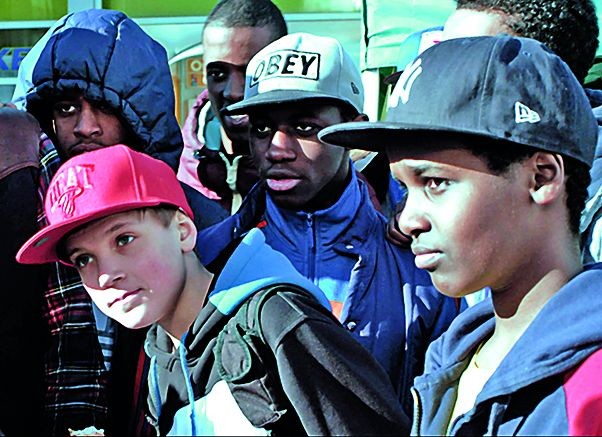 “In the names of our mothers – we will not tell anyone until we die.” Antistasin (Antti) and Muhiksesta (Muhis), two twelve-year-old friends from childhood days, swear to each other never to reveal what happened that night. The old drunkard Veijo had previously accused them of stealing his mobile phone. In the following scuffle on the edge of a steep bank, Antti pushes the man into the depths – the boys run away in panic about having killed Veijo. Not only is he the father of their classmate Riku. He also plays an active part in the neo-Nazi scene in the Helsinki suburb the boys live in. Its members hate everyone who is black, looks “foreign” or just different. Muhis with his Somali roots must fear for his life, should it ever come to light that he was involved in the accident. Antti has also troubles at home. His mother has a new boyfriend – Jouko. He is caring and cooks healthy food, but soon he exaggerates the control he exercises over the family. One day the great Tupac poster has disappeared from the apartment and it is dawning on Antti that Jouko also has another side. He is an evil racist, who thinks that black musicians have no place in his apartment and that black boys are no company for Antti. His mother closes her eyes and is happy to have found a reliable man who cares for her and her boy. Can Antti and Muhis preserve their friendship under these conditions?