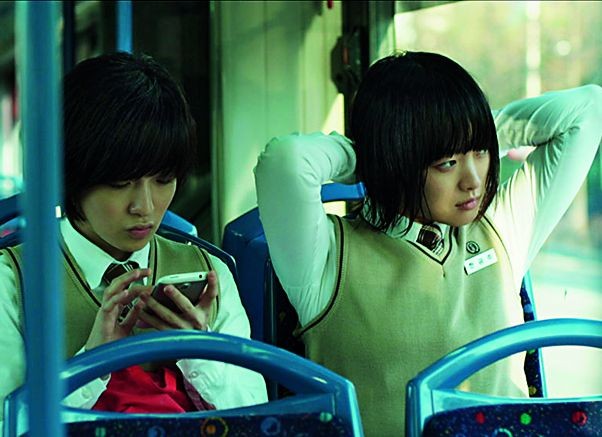 The girl Han Gong-ju goes to a new school and therefore moves to another town. Her former teacher Mr. Lee accompanies her, handles all formalities and accommodates Gong-ju initially with his mother. He gives Gong-ju a mobile phone, which she should only use for calling him, and leaves her to her new world. Slowly shy and timid Gong-ju settles down. With perseverance and willpower she regularly goes to the swimming pool and exercises there. Gong-ju wishes to swim to the end of the pool one day. She makes friends with Eun-hee from her class, who makes efforts to include Gong-ju in her a-capella band and introduce her to her circle of friends. Although Gong-ju’s thoughts often wander to her old life, she gradually begins to unbend in her environment. A classmate says about Gong-ju’s singing it is the voice of a person who experienced great sorrow. One day, shortly after her father’s visit, the past catches up with Gong-ju: Gong-ju and her friend were the victims of a gang rape at a party in her home. She has to be protected from the public due to the ongoing proceedings. Her friend committed suicide after the criminal act. The mother repudiated her daughter. The father has taken refuge in alcohol, while the parents of the rapists assert their sons’ innocence. Recordings of this evening are bluntly put on the web. How will people deal with their knowledge of Gong-ju’s fate?