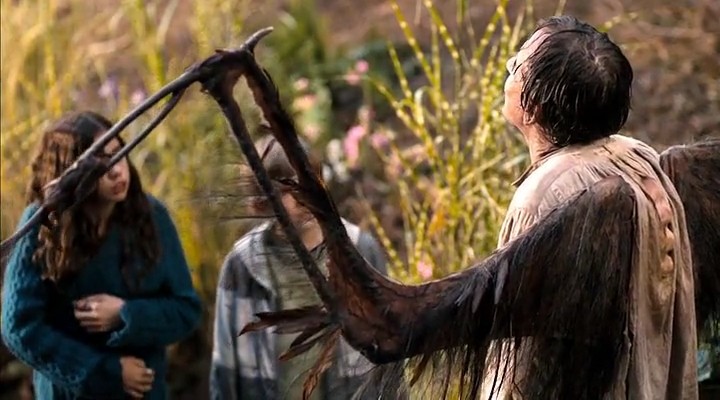 On a stroll through the garden of the new house, Michael discovers a half ruined dark shed. The boy often feels lonely because his parents have not had much time for him since his sister was born. Among the junk of old boxes and many insects, he finds a strange, skinny man. Everything seems eerie to Michael, but he wants to take care of this creature wasting away. This is not so easy. For Skellig, as the mysterious creature calls himself, only likes Chinese food and dark beer. The stranger is often intolerable because his limbs hurt. Mina lives in the house next door. She loves nature and teaches Michael to listen to the voices of the animals and to perceive his environment consciously. The boy decides to introduce Skellig to his friend. When the two of them are forced to find a new shelter for Skellig, they discover his wings, which are dried and folded. Something sinister is brewing. In the hospital, where Michael's prematurely born sister is treated, the boy discovers that Skellig is suffering from arthritis. A cure is possible. From now on, Skellig’s condition is improving. In gratitude, he initiates the two children into his magic. And Skellig uses his mystical skills to save Michael's sister from certain death.