Spook Under the Ferris Wheel - The Runaways 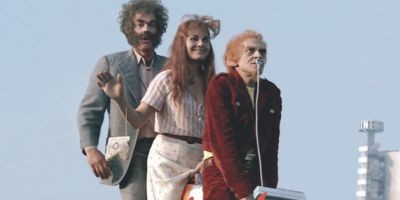 It is the holiday destination of dreams for other children but Keks, Umbo and Tammi consider spending their holidays with their grandparents every year as boring, though their grandparents are carnies and work at a fair. But this year turns out to be different. Why of all things did Umbo and Tammi have the idea of throwing semolina pudding around in the haunted house? The angry grandfather wants it all cleaned up, and quickly! Umbo and Tammy have another excellent idea and throw the witch, the giant and Rumpelstiltskin into the river Spree. The cleaning doesn’t happen: the fairytale trio – disenchanted and very much alive! – takes to their heels. A wild chase begins. All ghosts have magic powers and thus the runaways are able to dress in contemporary clothes in no time. And yet, they stand out of the crowd because of their outmoded courteousness. It confuses the Berlin people with their rough charm. On a stolen vacuum cleaner from the department store at the Alexanderplatz the witch Emma, the giant Otto and King Rumpi Rumpelstiltskin fly away to the Brocken, the witch gathering place in the Harz Mountains. On television, the programme is interrupted to report the hunt. Constable Märzenbecher prepares his under cover team for the mission “Brocken witch”: Keks, Umbo and Tammy are flown to the Brocken with a police helicopter to arrest the ghosts. Will they manage to transform them back into figures?