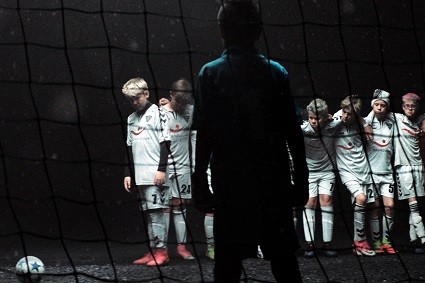 Ten-year-old Jón travels with his “Falcons” to the famous national championship on Vestmannaeyjar, the volcanic islands off Iceland’s southern coast. Jón is more insecure than proud about the fact that only the best football teams of Iceland meet there.
Already in the first match against their most dangerous adversaries, the islanders’ ÍBV football club, he happens to make a mistake. He collides with his friend Skúli. The “Falcons” captain breaks his arm in this clash and can no longer participate in the competitions. On top of it all, right after their arrival, Ívar, a strong and rather aggressive boy from ÍBV, took away Jón’s football. When Jón wants to recapture it, he involuntarily witnesses Ívar being beaten by his drunken father Tóti. Jón understands that he has to help the boy, even if he is his “enemy” and opponent. Therefore, he and his friends report Tóti to the island police. But strangely enough, policeman Knutur makes no move to do anything about it ...