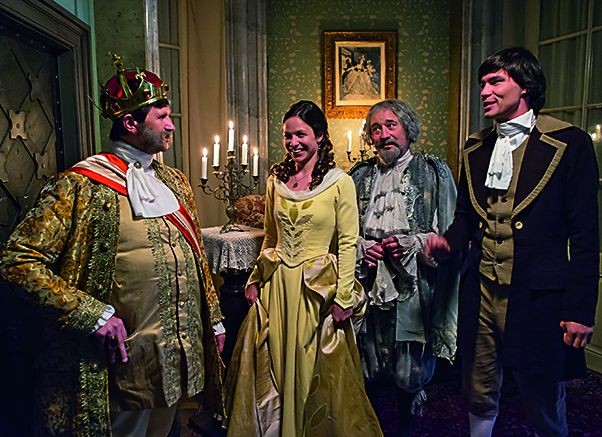 In a godforsaken cave, a travelling journeyman fills his pockets with gold. Voita lost his father and mother in the war and is now seeking his fortune in the world. He got to the abyss at Gallows Mountain only by chance – or have mysterious powers led him there in this spooky stormy night? Suddenly, he notices a strange fellow among the treasures. The apparent ghost and custodian of this treasure chases away the young man, who still manages to secretly pocket a small, fateful lighter ... Soon, however, after squandering the money in a village pub, Voita is in debt and therefore in a tight squeeze. The sly landlord harasses him, so in his distress, Voita operates the seemingly useless device. Like at command, the phantom appears again. It turns out to be the spirit of Arnoldo Fiorino, a former jeweller from Verona, who was condemned for his greed and his misdeeds on earth to serve every owner of the lighter. Arnoldo usually has to procure gold and precious stones, but soon Voita begins to long for beautiful princess Rosalie, of whom he has heard so much. By applying lots of tricks and magic Arnoldo succeeds in arranging a meeting between the two. But before the lovers can live as a couple, Hermina, the evil and devious advisor to the king, has to be defeated and Rosalie must be freed from the clutches of sinister village crooks. When events start happening very fast, the three brave little village rascals Zmizik, Pihoun and Šmajda stand by their side.