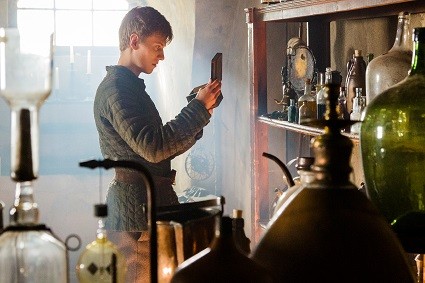 In search of work, destitute Valentin arrives in a town that is currently ravaged by a plague of rats. Shortly afterwards, all the rats have disappeared – through the power of Ambrosius the magician. By chance, he is looking for an apprentice. But at the entrance examination Valentin is tricked by his clever competitor Katrina, and therefore he has to stay with the benign pharmacist Zacharias. Instead of learning the art of magic, he is now supposed to cook stinging nettle broth and produce medicine. But something is wrong in this pharmacy. Whenever Valentin secretly performs magic, a broom strikes him on the back. The unsuspecting apprentice becomes suspicious and discovers that Zacharias used to be the queen’s grand master of magic. But now he has renounced magic and devotes himself to herbal medicine instead.
When Valentin and Katrina find out that power-obsessed Ambrosius has evil intentions, Zacharias has to reactivate his magic powers and work together with the two sorcerer apprentices in order to protect the town and the queen from looming disaster.