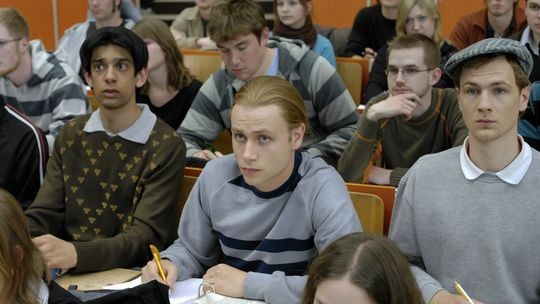 From the country to freedom - Moritz, called Momo, wants to get out of remote Wusterhausen. So he opts for studying business mathematics in Dortmund. Together with his friend Dirk he sets out to university in order to reach his new target with a thirst for action. Right in the first lecture the professor tells them that – statistically speaking – their right and left neighbours will not make it to the final exam. While Dirk quickly finds a place to live, Moritz spends his the first semester trying to find a room. Whether the shared apartment with Bernd really was a good idea, this is an entirely different question. During the next semesters Moritz cannot fully concentrate on his studies either. Just before his intermediate exam, he is thrown out of Dirk’s study group but he meets the Indian Aswin, who proves to be the perfect study partner for him. Aswin teaches Moritz the study material, Moritz introduces Aswin into the night life. Then there is also pretty Kerstin, who Moritz has had his eye on since the second semester. But for a long time, the approach is not really successful. And in between, Moritz spends one semester in Sydney. Only after a few detours and other incidents, Momo properly revs up. With the help of his friends he recognizes what really matters in life.