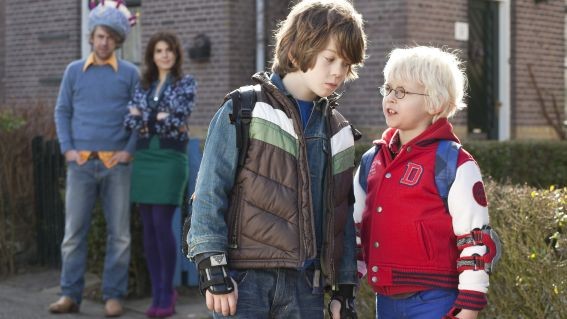 Alfie is a soft, somewhat timid boy with blond hair and round glasses. As a baby, he was abandoned and brought to the door of the family he now happily lives with. Tomorrow he will be seven years old. His adoptive parents and his beloved stepbrother Timmie are fully absorbed in birthday preparations when something monstrous happens. Alfie wakes up at 12 o’clock sharp in the night. Everything is quiet, only the cold light of the full moon is shining into his room. Suddenly Alfie’s skin begins to itch and a white pelt is growing on it. His ears become pointed and hairy, he cannot speak any longer, but only cry and whine. With a shock, Alfie looks into the mirror: he has turned into a werewolf, a werewolf child with glasses. Without meaning to, he jumps on the road, runs on four legs through the city and even loots the neighbour’s chicken coop. Alfie is at a loss. Who is he? Where does he come from and who are his real parents? Especially the fear his adoptive family might send him away when they find out, is giving him a lot of trouble. Who would want a werewolf as a child? Fortunately the nightmare is over in the morning. But the next full moon is soon to come.