Before the World Ends 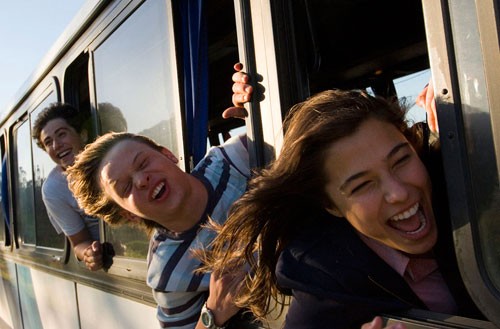 Daniel is 15 years old. He lives in a small town in Rio Grande do Sul. The world around him is small and yet full of seemingly unsolvable problems. And it is the time of fluctuating hormones, choosing a career, thoughts about the future and of first love. And that's what worries Daniel most. Mim cannot decide whether she wants to be Daniel’s or Lucas’ girlfriend. So this open decision always stands a little bit between the friends. One day Daniel gets letters from his father, whom he never met. His father works as a photographer in Asia. He sends his son not only messages, but lots of pictures, pictures showing the beauty of nature, the different peoples and different life. And they tell stories of unknown regions. Daniel discovers that the world is much bigger than he previously thought. His limited horizon is changing dizzyingly fast. Daniel believes he can meet his father and sets out to find him together with his friends Mim and Lucas. But they miss him. On the trip, Daniel gets the answer to an important question. Mim has chosen Lucas. The film tells the story of teenager Daniel through the critical eyes of his 7-year-old sister Maria Clara.