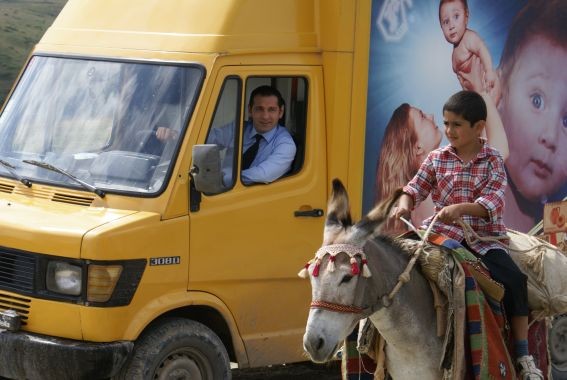 Buta is a pattern on carpets, which are woven in Azerbaijan, on fabrics, embroidery and in frescoes. It can represent a bud, the sun, a drop of water, a lambent flame, and many other things. But Buta is also the name of a 7-year old, imaginative boy, who lives with his grandmother in a mountain village. While she is weaving a carpet with the traditional Buta pattern in memory of her daughter, her grandson is dragging stone by stone up to a mountain in order to create a Buta sign. Everything that has wings should be able to admire it from the sky. The girl Gyoncha is weaving a carpet with this pattern too. She is resolved not to marry unless she has completed her work. Buta secretly watches Gyoncha falling in love with the representative of a soap company and making efforts to finish her weaving. However, Buta’s life also has its drawbacks. The village boys tease and beat him. Particularly ash-blond Azim insults him, calls him an orphan, and forbids him to play with his younger sister. They even destroy his stone signs. But Buta is strong and is not afraid of them, especially since the old soap seller from the mountains has been giving him a lot of strength and encouragement by his worldly wisdom. The white-haired man laboriously repairs the ruined water mill and tells Buta from his life and about his great love that he lost as a young man.