Captain Morten and the Spider Queen 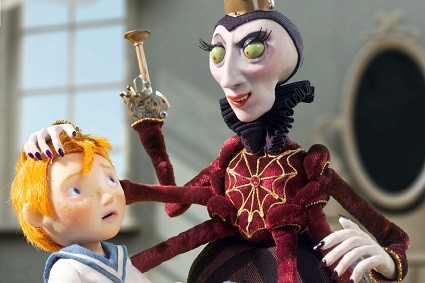 Little Morten lives in a village by the sea and dreams of being a real sailor, just like his father Captain Viks! But as soon as the latter is off to the sea, he leaves his son behind. Morten stays with heartless Anna, who is only interested in the big treasure that Captain Viks may find one day. When Anna’s kitchen is suddenly completely under water – thanks to Morten's self-made, small sailboats with insects as a crew - an unexpected adventure begins. Coincidentally, Morten is shrunk by an invention of the crazy village wizard and suddenly, he becomes the captain of his little sailing ship. Now, Morten has to save everyone from destruction and his own life from the evil spider queen. And then he also learns of the devilish plan to rob his father of his sailing ship. Will the tiny little boy manage to help everyone and to grow again? Will Morten be able to save his father’s sailing ship from Anna and deceitful Mr. Stinger? And will he finally become a real captain on the high seas?