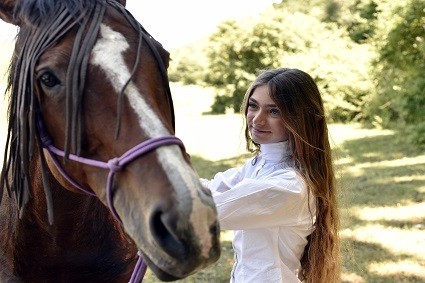 After Edhel’s father was killed in a tragic riding accident, Edhel and her mother make a fresh start in another city. However, the weird girl has problems making friend. She absolutely wants to prevent people from noticing her secret, which she hides under her hood. Therefore, she suffers from the teasing of her classmates. Her only friends are her riding instructor Ermete and her father’s horse, Charon. The relationship with her mother has also been very tense since her father’s death. Whenever Edhel’s everyday life is too much for her, she flees into a mythical sketchbook full of strange worlds and beings. She gets to know Silvano, the artist who made the book and is immediately fascinated by his stories about elves and magical portals to other worlds. When she and her secret are exposed at a party by her alleged friend Nicolas of all people, Edhel decides to believe Silvano’s stories and leave with him to find the elfin kingdom. Before they can implement their plan, events become dramatic and Edhel disappears without a trace ...