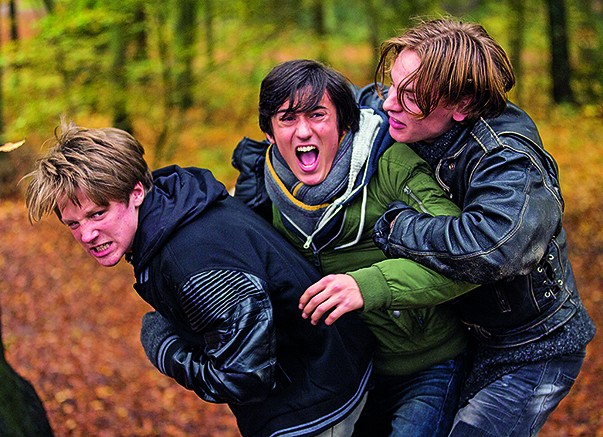 As long as they can remember, 15-year-old Sander, Chris and Maarten have only be known as a trio – both at school and on the football field. Sander is rather considerate, Chris, who is dreaming of a career as a professional footballer, is ambitious and impulsive, and Maarten is always there when he is needed. But then Chris befriends Emiel, one year his senior, who rides fast motorbikes through the city and always seems to have money. The boys’ close relationship is beginning to show cracks. When Sander is the only one of them to be selected for the A1 team and falls in love with his classmate Indra, he increasingly finds himself “offside”. Soon Sander suspects Emiel of encouraging his old friends to steal and mug younger students. But all attempts to discuss this topic with them have failed. One day, Sander arrives in the park and sees Emiel and Chris knocking a teenager unconscious. While Maarten is just watching, Sander breaks up the fight. But when he wants to call the police, Emiel, but also his best friends, put massive pressure on him.