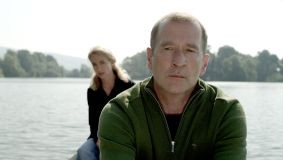 Six-year-old Moni believes that everything will be all right now. But Johanna, her older sister, is sceptical. Her violent father has just returned home after an anti-aggression therapy. But even now he cannot get himself under control. When routine starts again in the family’s everyday life, he takes out his pent-up aggression on his wife Erika. While the sisters lock themselves in their room and listen to loud music, Robert beats their mother up brutally. The girls – like Erika herself – do not want the problems to leak out. The facade of an intact family must be maintained out of shame, fear and helplessness. This is why especially Johanna is very withdrawn and becomes an outsider. Her only confidante is her older sister Claudia, who moved out two years ago because of her father’s violence and her mother’s indecision. She demands in vain that Erika and the girls defend themselves against their father and get help. But then Johanna falls in love with 15-year-old Christian. Soon he realizes that there is something wrong with his girlfriend, and wants to know the truth. Johanna has to take a decision and finally find the courage to lift the cloak of silence.