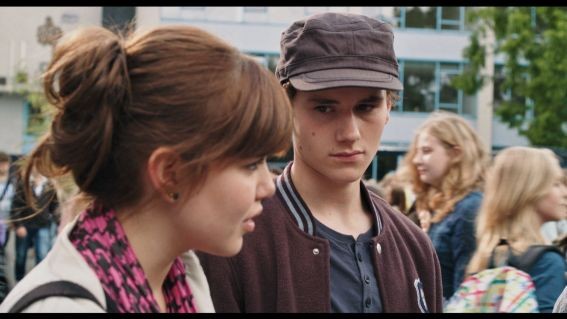 Based on Carry Slee’s book of the same title, this film tells the story of 15-year-old Sven and his first love, Roosmarijn. For quite some time, Sven cannot be relied upon any more. He is either late or does not turn up at all. He has promised his friends several times to film them at their parkour, but he forgets the agreed date. But in reality, the 15-year-old is not scatterbrained as everyone believes. He is regularly abused by his father and afterwards does not dare to go out due to his injuries. The shame and the sense of powerlessness are just too great.
Roosmarijn of the same age is in a similar situation. Her math teacher Bob waylays her at every opportunity and sexually harasses her. She does not dare to tell her friends and classmates either, especially since Bob is very popular among them. She cannot even open up to Sven. Her only joy is meeting him for film recordings with herself in the lead role of his first feature film. But often Sven does not keep to their agreements, so Roosmarijn is no longer sure he really likes her. Sven increasingly realises that he puts his relationship at risk if he does not finally manage to break the wall of silence.