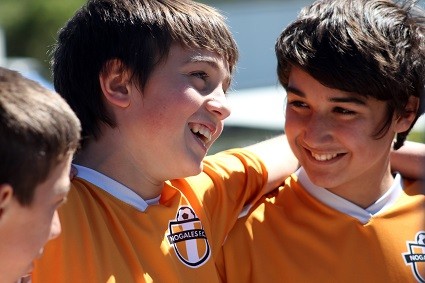 Tito loves football, he actually does not want to do anything else. If only there was no school and no homework. Tito faces grade retention. Although his father supports his sporting ambitions, he does not want to accept the boy’s school results. It is clear to him that football alone cannot secure Tito’s future. One evening, the father is approached by a players’ agent. He offers the family a monthly income, an apartment, a health insurance, if Tito becomes a player of the successful team from the capital of Montevideo. His father struggles with the decision, even the teacher advises against it. Tito’s mother, however, defies him because she wants to leave the narrowness of the small town and poverty behind. Pressure on the boy is getting higher, the other players boss him around in their training, advertising and television mob him. In the final match Tito shoots the decisive goal. But the deepest fall is from the highest peak.