Kaddish for a Friend 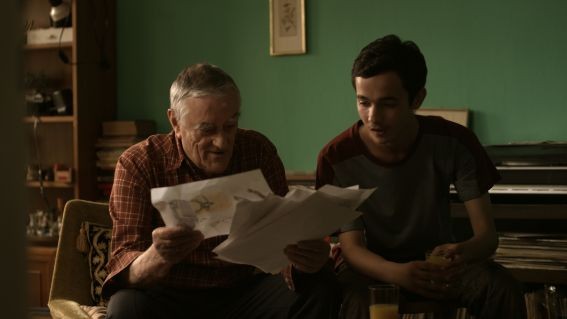 While growing up in a Palestinian refugee camp, 14-year-old Ali learned as a young boy to hate “the Jews”. Now his family, who lost everything in Lebanon during the war, has moved to Berlin. On his first day there, Ali discovers that a Russian man lives above them – ironically a Jew! This is Alexander Zamskoy, he is 84 years old and has lived alone in the now somewhat run down apartment since the death of his wife. Soon, the boy and the old man get acquainted, at first in a very unpleasant way. An Arab youth gang including his cousin Younes require a test of courage of Ali, he is to break into the Jew’s home. Ali opens the door with a trick, but then the boys destroy the entire furnishings and write “Jew = Nazi” on the wall. Surprised by Zamskoy, the youths can escape, only Ali is caught by the old man and loses one of his sneakers. With the evidence in hand, Zamskoy goes to the police and reports the boy. Now Ali and his family, who are only “tolerated” in Germany, are threatened with deportation. In their distress, Ali’s mother asks the neighbour to withdraw the charge. Zamskoy agrees, but only on one condition: Ali has to redecorate his apartment and thus repair the damage.