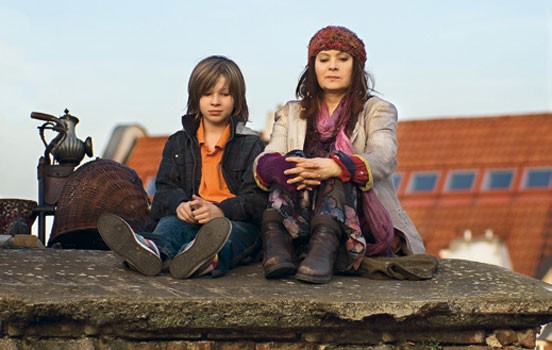 Kitty Mama does not only love cats, she is also a good witch. She lives in an ordinary apartment building but she can fly into the fairytale world on her motorized broom whenever she wants. She has been doing this often lately, because there is big trouble. Beautiful princess Caroline is to be sacrificed to the evil dragon. The king has summoned heroic princes to his castle in order to save the princess. But when the three-headed dragon appears, the frightened loudmouths are hiding under the table. Solely poor puppeteer Vitek follows the princess into the dragon’s kingdom and frees her from the monster’s clutches. However, he achieves it only with the the help of Kitty Mama, who turns the dragon into a harmless marionette. But Vitek must not tell anyone of his heroic deed to make sure the dragon will not change back. He even has to remain silent when one of the princes boasts about having saved Caroline and asks for her hand in marriage. Here again, the perfect sorceress has to intervene. But also Kitty Mama’s neighbour boy Jirka needs her help, so she simply takes him to the fairytale world.