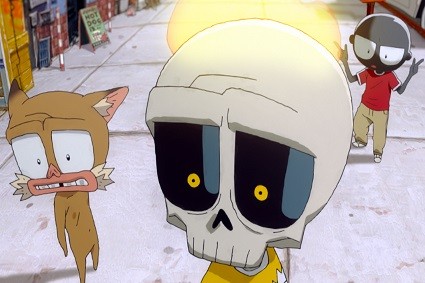 Angelino, a young loser, and his buddy Vinz from notorious Dark Meat City spend their everyday lives with odd jobs, monotonous games and long palaver. One day, they get into a mess. After the seemingly accidental glimpse of a pretty girl and Angelino’s resulting scooter accident everything suddenly falls to pieces. The two have long since come to terms with the cockroaches in their rotten hellhole, but boys armed to their teeth coming to their hangout and assaulting them is totally awesome. Although they narrowly escape, their flight turns out to be a dangerous cat-and-mouse game leading Angelino and Vinz deeper and deeper into the abysses of the city juggernaut. Angelino constantly sees strange shadows and bizarre creatures, at night he is plagued by bad dreams from his childhood days. Soon he realizes that he has become the target of mysterious figures in black. And it dawns on him that he is not dealing with terrestrials. “Mutafukaz”! – is a slang word used in French suburbs as one of the meanest swearwords ever.