Once Upon a Time - Indianerland 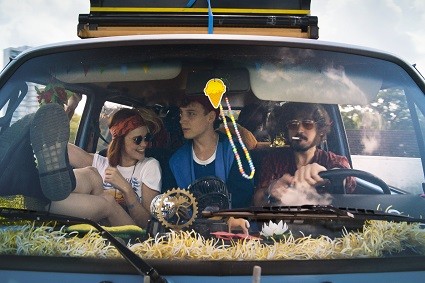 Fast forward, flashback, no pause – Mauser experiences his life like a movie he is only just watching. He loves nothing except boxing. The 17-year-old lives in a prefab block of flats. His father and his stepmother have forced him to move out. In front of the house, there are some cliques and petty criminals, including Condor, with whom he attends an illegal party. There he meets Jackie, a beautiful girl from a good home. Mauser falls in love with her. But the next morning he finds a postcard from Edda in his mailbox. Edda? Oh yes, the odd girl from the parcel shop. When Mauser’s stepmother is found dead in the flat and his father disappears, reality and responsibility break into his life. He gets to know that his father is hiding at the “Powwow” hippie festival, so Edda and Mauser go there. But then Jackie shows up. Edda feels used, and the young boxer goes through his first drug trip. The next morning he meets his father, and Condor knocks Mauser out – Is all this just a bad dream? When will he finally wake up?