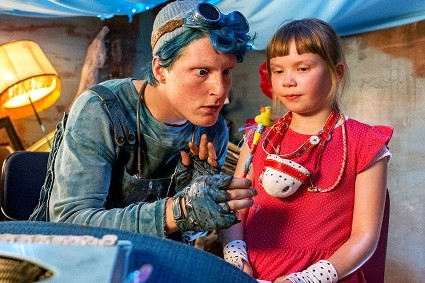 Mai will start school soon. The seven-year-old is called Pony, she likes running around with a horse mask, and she can neigh like a real little horse. That annoys the constantly bad-tempered headmaster, who lives in the same block. When he tells Pony that there are strict rules at school and that animal masks are not allowed, she refuses to go there. Nothing helps – no persuasion by her parents, no “bribe”, such as a new backpack, and no psychologist! Even less when Pony meets a blue birdboy who lives in the container downstairs. She finds a friend in him, who is funny and crazy. Above all, he has many ideas about how Mai can avoid school enrolment. At first, the two of them set out for a horse farm where Mai should become a real pony. She can whinny and hop like a horse, but can she eat grass? Not a good plan! But birdboy has many more ideas in store, which are funny and clever, but unfortunately, also a very dangerous one.