Solan and Ludvig: Christmas in Pinchcliffe 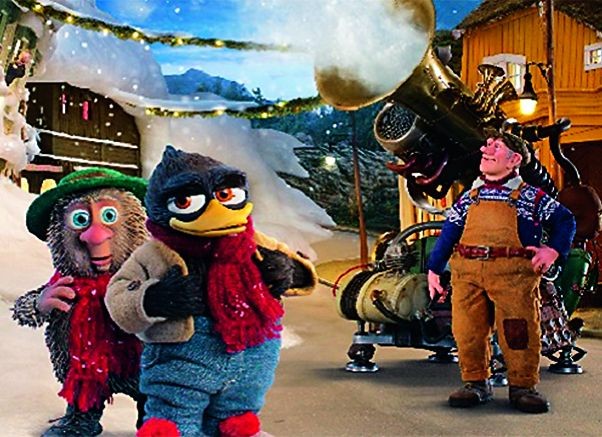 Christmas is just around the corner but despite the newspaper’s daily announcements of snow for Flåklypa, there is no sign that winter is actually going to come to the Norwegian village sometime soon. For Ludvig the hedgehog, who lives together with Solan the magpie and inventor Reodor Felgen, anything but white Christmas is unthinkable. And the people of Flåklypa are getting frustrated, too: The kids can’t go skiing, Christmas trade is low and there has been no use for the brand-new snow shovels so far. It seems there is only one solution to save this year’s holidays – Reodor needs to build a snow machine! No problem for the resourceful mechanic, who resorts to his workshop and has Solan and Ludvig finish the Christmas preparations. However, when the talkative magpie gives away the existence of the machine, the snow canon falls into the hands of Frimand Pløsen, the ruthless newspaper editor. As it happens, the long-awaited snowfall sets in and both humans and animals are joyfully looking forward to the festivities. Pløsen, though, aims at a new snow record to rescue his paper with the headline and so Flåklypa is soon on the verge of disappearing under the snow masses. The impending disaster can only be averted by stopping the snow machine. Solan, Ludvig and Reodor have to take action and Ludvig has to prove that he is not the scaredy-cat everyone believes he is.