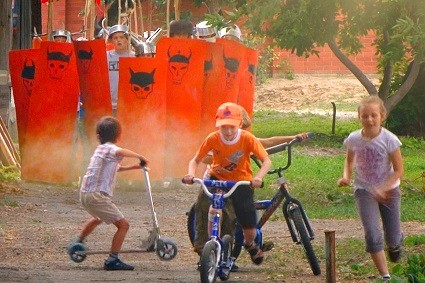 Only one more day and Johnny will be nine years old. Then he will finally be freed from the “bondage” of his cousin’s summer camp and be allowed to enjoy his summer holidays together with his friends Serge, Victoria, Boris and Stas. But Johnny does not leave the camp without making a promise. He will stop tyrant Terence and his gang, the horned vikings, and end their raids on the neighbourhood’s younger children. So Johnny and his friends meet at their headquarters to scheme a plan to put an end to this reign of terror. However, the five children come into the firing line of the gang themselves. In addition to all this trouble, Victoria suggests that the small group should not only fight and play football, but also do their part to improve the world. So they decide to help Mrs. Basilson in her garden. By chance, the friends come across the perfect, animal solution to their Viking problem. With the help of the other children in town, they challenge Terence and the other enemies to get rid of these monsters at last in a final fight.