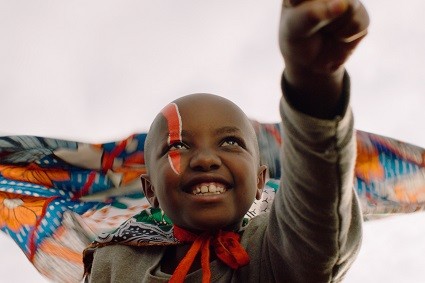 Jo is a girl in Kenya who dreams of a superhero life as “Supa Modo”. But she has cancer and is terminally ill. Her mother Kathryn therefore brings Jo to her home. She should not spend the last months of her life in a hospital. But Jo’s older sister Mwix feels that Jo misses her friends from the clinic and playing with them. However, Kathryn seals herself and her little daughter off from the world around them. Secretly, Jo and her sister make trips to the village. Mwix and the village community stage ever more elaborate moments for the sick heroine to show her superpowers. At first, she only shifts a salt shaker by the power of her mind, but then she apparently freezes the market bustle to catch a pickpocket. When Jo’s mother learns about it, she feels patronized and betrayed. But her resistance crumbles, as Kathryn can see how much her daughter loves the idea of starring in self-made superhero movie. Jo does not live to see the end of the filming. How will Kathryn and Mwix cope with this loss? They find salvation in an unexpected movie night.