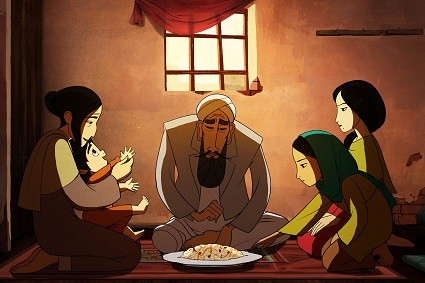 Eleven-year-old Parvana lives in Afghanistan in 2001. The Taliban control the country. Only stories sweeten everyday life. Girls and women have a hard time: they must not leave the house without the company of a man, they must not buy anything, they must not work. When Parvana’s father is arrested under a pretext, the girl is alone with her mother and her siblings. Since her only brother is too young, Parvana has to disguise as a boy to buy food for the family. She cuts her hair short and struggles along in Kabul together with a friend who also has to disguise. Soon Parvana’s oldest sister is to be married to secure the now “unmanned” family. They have to move, but Parvana does not want to accept that she will never see her father again. When she finally succeeds in freeing him from prison, he is severely weakened, and the war is already raging around her. American fighter jets roam the sky. Will the fight for survival continue?