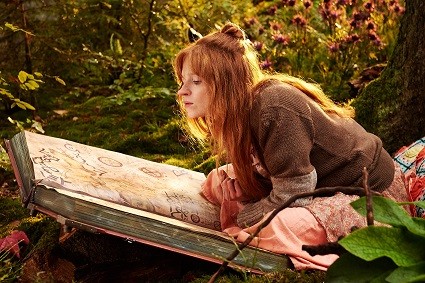 The little witch hates prohibitions. So she violates all the strict witch rules by secretly making contact with human children, not adhering to the strict Friday witchcraft ban and even planning to fly to the Walpurgis festival on Blocksberg mountain. Although she is far too young for it at her age of 127 years, two months and 22 days! The little witch is promptly caught at the Walpurgis fire and as a punishment, she has to walk home on foot carrying the thick, heavy magical book. She is to lear its 7892 spells by heart within a year to prove that she has the makings of a good witch. If she does not succeed, the little witch will be banned from Blocksberg forever.
While getting down to work with her best friend, talking raven Abraxas, she discovers that her understanding of a “good” witch differs completely from the ideas of the witch council. Above all, she cannot accept that she is no longer allowed to visit the village children. Not a good precondition for passing the exam, especially since resentful weather witch Rumpumpel secretly spies on her.