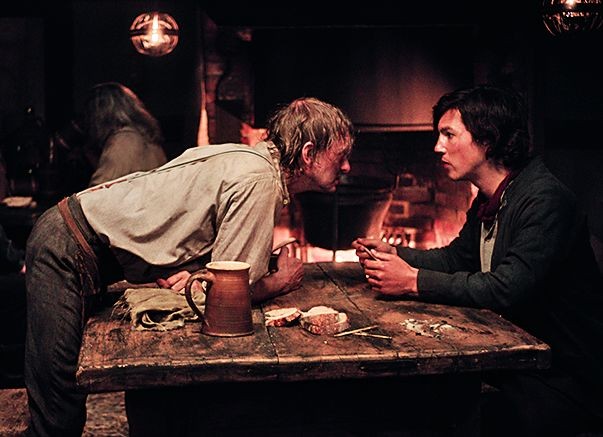 The two potter sons Michel and Casper are out in the forest collecting wood late in the evening. While Casper, the older brother, is afraid of the “haunted” moor nearby, Michel is not afraid of anything or anyone! But he would love to know what fear “feels” like. His father also thinks that fear is important because “you can only realize a danger if you fear it”. He therefore sends his son to the minister. For a small “donation”, he is to let Michel stay overnight in the church steeple and scare him dressed as a ghost. But the minister's effort is for nothing: he rather plunges down the stairs than giving Michel the creeps. So the boy has no option but to go out into the world and learn to be afraid. At the beginning, he travels through the “haunted” moor, where he finds two scary bog bodies. Then, Michel gets to a secluded pub full of dodgy characters. They tell him about the misfortune of the king, whose castle and treasures have been taken by the “souls of the damned”. The one who manages to free the castle from haunting would be given half of the crown treasures; and he would be allowed to marry the king’s daughter, Princess Elisabeth. The fearless potter son immediately sets off to see the king knowing very well that many heroes have already failed to fulfil this task.