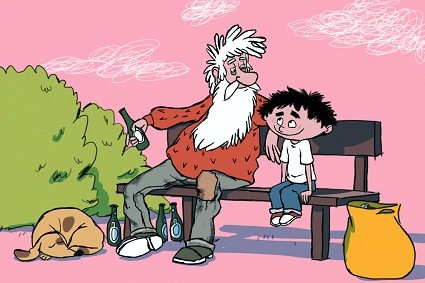 Little Vitello is wild and full of crazy ideas. Sometimes he puts all his clothes on inside out, or he tries to hold his toothbrush between his toes when brushing his teeth. Only at night he sometimes sees monsters and is then exceptionally allowed to sleep in his mother’s bed. She is nice, cooks wonderful spaghetti and grants her son many liberties. Moreover, Vitello has three great friends living in the neighbourhood: the twins Max and Hasse and little William, who romp about or play kidnappers and beggars with him. Everything would be wonderful if only he had a father, one who lives with them. Vitello does not even know what his father looks like, because he's been cut out of old family photos. When he asks his mother about him, she gets angry and calls the unknown person a villain. So Vitello has no choice but to look for a father himself. But somehow the men in the street react quite strangely when he asks if they want to be his dad. Except for the hot dog salesman and the old man on the park bench, who looks like God with his long, white beard ...